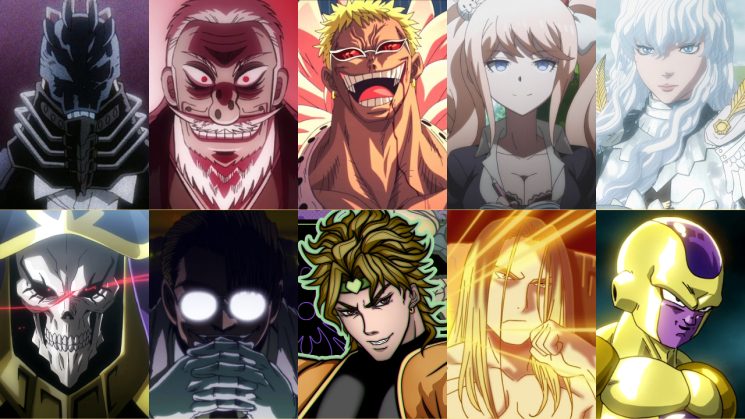 Watching anime has always been my favorite hobby. Be it action or romance, a good anime can relieve you from boredom and monotonous routine. However, what I love about these shows is their exceptional depiction of antagonistic characters also known as villains. I have watched a number of anime over the years and can declare that villains that have a proper background story are more memorable than those that are just representing their power and evilness on the screen.

If you are looking for an antagonist with a well-developed backstory and unique traits, then no one can beat Light Yagami from Death Note. Actually, he is one of the scariest villains in the history of amines because he relies on his brain rather than physical power. This trait of the character makes him superior to his enemies and helps him achieve his goals by all means.

The main purpose of Light Yagami is to become the God of the new world, which he is willing to achieve at all costs. In the process, he ends up killing a criminal and later stages a whole genocide without worrying about the consequences. His wit makes him different from other animated villains and is one of the reasons for the anime’s great success.

If you have watched Jujutsu Kaisen, you would be very much familiar with the character of Sukuna. Sukuna was once a famous sorcerer who was praised for his abilities and outstanding sorcery. His skills made him stand out among his competitors and no other sorcerer had the ability to overpower him. However, the real cause begins after the death of Sukuna, when he becomes a cursed spirit and wants to seek vengeance against others.

The Sukuna has been termed as one of the greatest anime villains of all time because of his ultimate curse that can not be controlled by other sorcerers and they end up sealing his twenty-five fingers in order to put him to sleep. Unfortunately, our protagonist ends up eating one of the fingers of the Sukuna’s spirit, eventually lifting the seal and reawakening him.

We often come across villains that were good people in the beginning, however, their internal greed and negative emotions often lead them to the path of no return. Lelouch is a perfect example of such a character. The popular antagonist from Code Geass originally wanted to punish Britannia’s atrocities, however, ends up choosing the wrong means to pursue the goals. This anime villain has performed all types of outrageous and moralless activities ranging from treason to murder.

Moreover, in his attempt to punish the atrocities, he ends up becoming like them when he rises to power and becomes a security threat for the people of Britannia. The most interesting aspect of this character is its backstory, which focuses on the death of his mother at the hands of those in power which is the major reason for his determination to seek revenge from the authorities.

Who isn’t familiar with Frieza from Dragon Ball? In fact, he is the most reasonable yet highly memorable anime villain of all time. The major influence of the character on the Z-fighters is the constant motivation to empower themselves so that they can fight against Frieza at the crucial moment. However, what makes the character memorable is its mysterious aura and the fascination associated with it.

Freiza was one of the unique villains of its time and had no concept of redemption or analyzing the consequences of his actions. The character was solely developed with a single-minded personality that only wants to achieve the desired results without caring about the means or consequences of its actions.

Was Griffith a villain?

Griffith from Berserk wasn’t originally a villain and was introduced into the story as the partner of the lead protagonist. However, his jealousy toward his partner and insecurities forced him to turn evil and eventually backstab those that trusted him unconditionally. He is shown to have great charisma and the ability to attract others to himself. These traits enabled him to control others and use them as a ladder for his ultimate success.

Who is the most tragic anime villain of all time?

I would not be wrong to term Akaza as the tragic villain of all times. The antagonist serves Muzan, his master, as an evil spirit who brings misery to others. The character has a very well-developed background story in the manga with an extremely interesting arc. If you haven’t read the manga, we highly suggest reading the tragic past story of Akaza, since it was not mentioned properly in the anime version.

Which types of villains are preferred by the viewers?

Not all villains leave a mark on the hearts and minds of the viewers. It has been observed over the years that characters that have a well-developed arc and a convincing background story are more memorable than those that are depicted as purely evil beings without any sense of redemption or proper explanation for their actions. I personally prefer smart villains over the powerful ones because wit and smartness can certainly overpower the strongest competitors.

For those that love villains more than heroes, it often becomes difficult to choose the most memorable one in the history of anime. But, don’t worry as we have brought you some of the best anime villains of all time that not only have an engaging past story but also exceptional personality traits that make them different from the ordinary villains you often see in most stories.

So, read the article carefully and let us know about your favorite villains from the popular animated series. I personally love Light Yagami from Death Note because of his outstanding abilities, charismatic character, and higher IQ, which is capable of beating every other villain that he might encounter.