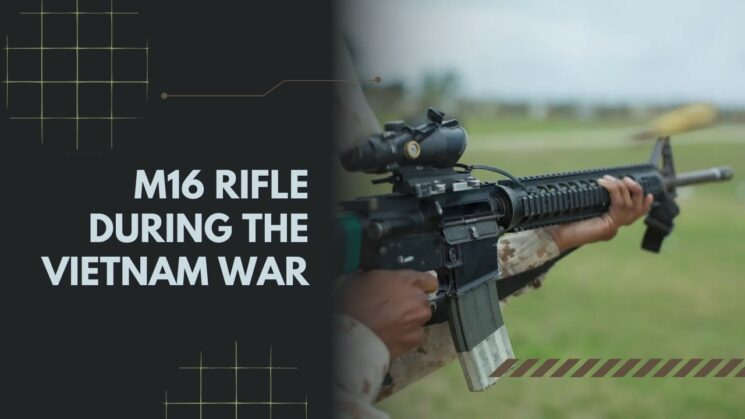 In this blog post, you will explore the fascinating history of this powerful weapon. From its first use in Vietnam to today, the M16 has been an integral part of the military culture for over five decades. So get ready to dive into the past and learn all about this iconic piece of weaponry!

The M16 rifle has had a long and tumultuous history since it first entered combat use in Vietnam in the early 1960s. The M16 quickly replaced the M14 rifle as the standard issue service weapon of the U.S. Military, however, its deployment was hampered by a number of issues ranging from inadequate training to poor quality firearms, ammunition, and lubricants.

This article will trace the history of the M16 from its initial conception to its rise in popularity and eventual decline after Vietnam. It will show how this rifle became a symbol of the Vietnam War and helped shape military technology for generations to come.

Before we dive in, if you’re interested in some unpublished poetry and information from World War II, we have a perfect article for you!

Additionally, we will discuss some of the difficulties encountered during its deployment in Vietnam and outline some solutions that have been put forward to improve upon these issues over time.

By looking back at this experiment in military technology we can better understand what works in combat situations and apply these lessons to any future endeavors that involve modern firearms.

Development of the M16 Rifle 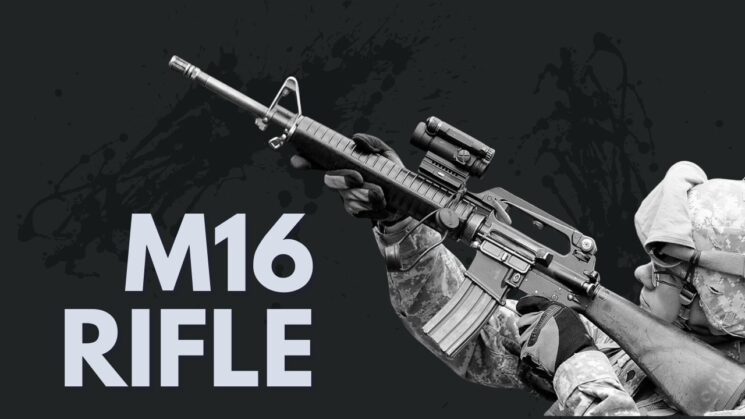 The M16 rifle was designed by Eugene Stoner of ArmaLite Corporation in the 1950s in response to a request from the U.S. military for an improved infantry weapon. The development of the M16 began with the AR-15, a selective fire version of Stoner’s AR-10 design with an automatic operating system and aluminum alloy parts. The original version designated as the AR-15 was ready for testing in 1957 and after numerous modifications, it entered production as the M16, or Rifle Caliber .223 (5.56 mm).

To reduce weight, Stoner developed a new form of plastic called DuPont Zytel, which was used to replace many other parts that would normally be made from metal or wood. To provide greater accuracy and decrease recoil, he designed a heavier buffer tube located at the back end of the receiver that housed springs and weights more than conventional models.

To simplify maintenance and reduce the amount of moving parts inside the weapon’s receiver, he incorporated an innovative dual direct impingement gas system rather than utilizing an operating rod. This also allowed for ammunition firing at a rate faster than traditional gas systems such as those found in other service rifles like the M14 or AK47 rifles commonly used by enemy forces during this conflict.

The M16 first saw action in the Vietnam War during the early 1960s. During this time, the U.S. military was transitioning from the M14 rifle to the M16 as its primary battle rifle. The new weapon was intended to have superior range and accuracy over the older model and weighed less than half as much (6 pounds compared to 14).

It quickly thrived on its lighter weight in Vietnam, allowing for more mobility when traversing dense jungles and hard terrain. It also had a higher rate of fire – 700-900 rounds per minute – than other rifles of its time, which made it a formidable enemy against Viet Cong forces that had fewer weapons.

In addition to its usefulness as a battle rifle, the M16 could be used in several other applications during the Vietnam War. For example, it could be rolled up and used as a makeshift bazooka or mounted atop various vehicles for greater accuracy when taking out targets at long-range distances. It was even modified so that flamethrowers could be mounted on it, making the process of clearing out large areas much easier and more efficient while limiting casualties on both sides.

Why did it fail in Vietnam?

The M16 suffered from jamming and “stick” problems due to its design – when fired, bullets would sometimes stick in the barrel and cause jams. Additionally, reports of soldiers using their rifles as clubs instead of firing them accurately led to increased rates of injury and death among American troops stationed in Vietnam. 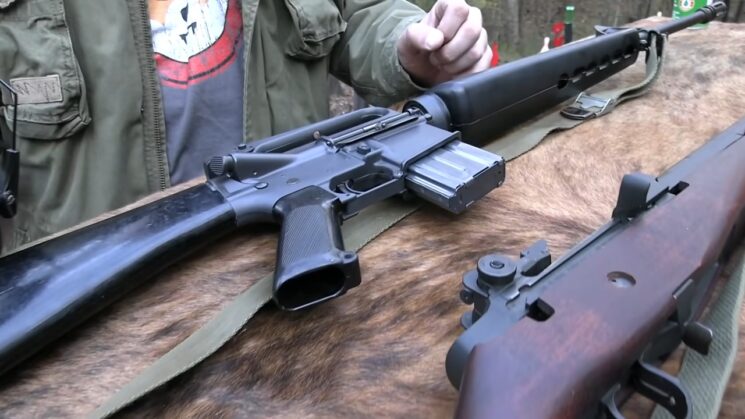 The other issue with the M16 was its accuracy. The gun was designed to fire a high-velocity cartridge at a fast rate, but Vietnam battlefield conditions were far from ideal. The hot, humid air caused inaccurate shooting and increased jamming rates. In addition, soldiers often struggled to find targets at long distances due to poor visibility.

Another problem was its ammunition supply. The gun could only fire standard military rounds, which were not effective against enemy armor or buildings. To make matters worse, American troops were often inadequately trained in how to use the weapon system. As a result, they were frequently forced to resort to using less-effective weapons such as grenades and machine guns instead of the M16 rifles.

The sent ammunition was not effective in humid environments, which made fighting in the jungle very dangerous.

Finally, U.S. troops were not adequately trained in how to use the M16s. They were often issued weapons without proper training or instruction on how to use them properly.

Advantages During the War 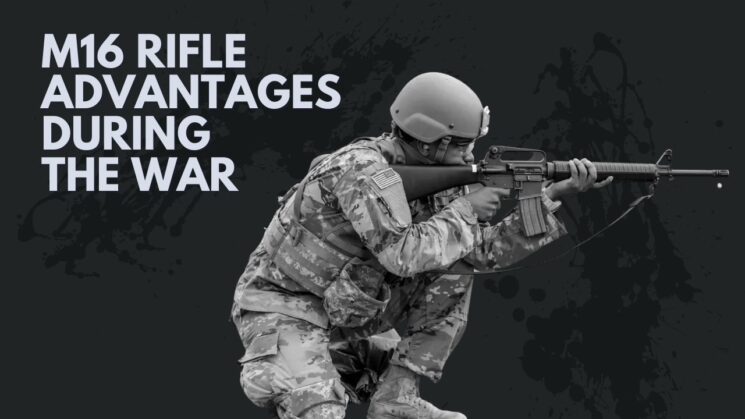 The M16 rifle and its variants were the primary firearms used by American troops during the Vietnam War. Developed as a self-loading, gas-operated selective fire rifle, the Armalite AR-15 (the predecessor gun to the M16) first went into mass production in June of 1959.

It had several advantages over other firearms used during this time period. Its light weight made it easy to carry compared to older machine guns, allowing the soldier to maintain a high level of maneuverability and flexibility in combat situations.

It could also be outfitted with various attachments, including telescopic sights, grenade launchers, and detachable bayonets for close-quarters combat engagements with Viet Cong forces.

The rifle itself had an effective range of 1,000 yards and was fully automatic. This gave it superior firepower at longer ranges than other weapons available at that time. The M16 also had a tougher design suitable for harsh jungle environments; while it required higher maintenance than other rifles, it provided greater reliability than many previous models being used by U.S. forces in Vietnam at that time.

The M16 Rifle, first issued to the United States Armed Forces in 1964, had several disadvantages during its use in the Vietnam War.

It was designed to be light and easy to carry while still providing enough firepower to be effective. However, due to its light weight, it was prone to excessive recoil which could throw off its target accuracy.

Also, it suffered from jamming when used in humid climates with wet foliage since the gunpowder residue attracted moisture and caused misfires. The slow rate of fire of its semi-automatic mode as well as a lack of heavy penetrating rounds made it less effective against enemy fortifications such as bunkers.

High maintenance costs and frequent breakdowns were other issues during the Vietnam War. The rifle required meticulous cleaning from debris or sand that accumulated during active duty in order for it to operate efficiently, which put a strain on soldiers tasked with maintaining them while fighting on multiple fronts. In addition, even though there were multiple models available throughout the war period, none of them fully addressed many of these issues making them unreliable at times when they were needed most.

Impact of the M16 Rifle During the Vietnam War 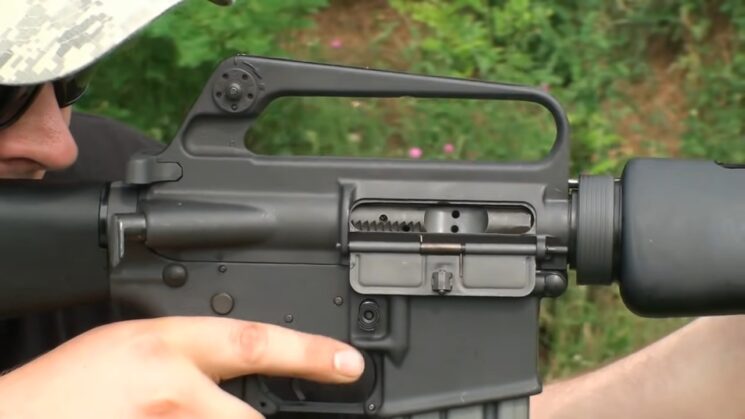 The M16 rifle significantly impacted combat tactics, marked a major shift in firearms technology, and transformed the way wars are fought. It was a lightweight weapon made from aluminum, steel and plastic that enabled U.S. soldiers to easily move around and cover great distances without having to lug around heavy firearms.

M16 provided U.S troops with several tactical advantages: firstly, its smaller cartridges allowed soldiers to carry more ammo on their person compared to other military weapons used before; it also allowed them to fire multiple shots in quick succession before having to reload, and its reduced recoil enabled soldiers to stay on target while shooting more accurately than any other gun available at that time. This rifle also had special features like three-round burst capabilities which further enhanced the accuracy of shots fired from this weapon in times of war or conflict.

Although the M16’s initial deployment did have some hiccups (e.g., jamming issues due partially due to inadequate cleaning procedures), it eventually became an essential tool in the United States arsenal throughout Vietnam War — so much so that it is still being manufactured today as one of the most widely used guns in modern warfare operations around the world.

Legacy of the M16 Rifle

The M16 rifle has had an interesting history since its development in the 1950s. In the Vietnam War, it was an integral part of the United States Armed Forces’ weapon arsenal, and its legacy has withstood the test of time.

It proved to be reliable, versatile, and accurate; however, it had issues due to its direct impingement gas system and aluminum corps construction. The weapon’s design flaws led to corrosion and lengthy maintenance times which resulted in high levels of battlefield attrition when exposed to dust, mud, and moist climates that still remain a considerable disadvantage compared with other weapons systems of today.

Due to its lightweight design, high rate of fire, and low recoil characteristics, the M16 provided a great advantage on the battlefield for troops who were equipped with it during Vietnam.

It also represented one of America’s most successful military innovations at that time for ground warfare purposes and continues to be a valuable asset today for service members around the world as a primary assault rifle for infantry troop use as well as specialized paramilitary operations.

The legacy of the rifle led to further improvements being made on its successors such as model variants like Carbine Rifle M4A1 which is now used by many countries as one of their main assault/combat rifles including the US armed forces.

Its long-term durability has been impressive when put next against all other versions that have come since then, such is a testament to William C. Davis Jr.’s initial design vision which was first adopted by military forces in 1964 onwards during the Vietnam war conflict era.

The M16 rifle is one of the most iconic guns of the Vietnam War. It was well-suited to the jungles of South East Asia, producing very little recoil and providing soldiers with accuracy and power on the battlefield. The design was inspired by earlier weapons such as the M14 but ultimately pushed technology to evolve beyond clip-fed calibers and into turbocharging automatic firing capabilities.

For this purpose, it proved a great success as an assault rifle for many U.S. Army personnel during the war effort in Vietnam. The design saw improvements over time, such as ensuring its internal parts were tough enough to withstand dirt and grime in harsh environmental conditions, but it regained its negative reputation due to propellant issues that led soldiers to suffer from misfires or jams when using them in combat.

The M16 is still one of the most widely used modern assault rifles today and due to technological advancements since its invention, its current version is considered more reliable than previous models used during Vietnam War.

However, M16 was not effective against enemy fire due to its low firepower and high jam rate. Additionally, troops found that the weapon was difficult to operate in close quarters due to its bulky design.

With improved manufacturing processes and modern materials being employed by gun makers around the world, there are few better examples of an evolutionary process that rose out of a war as successful as this rifle’s history shows.