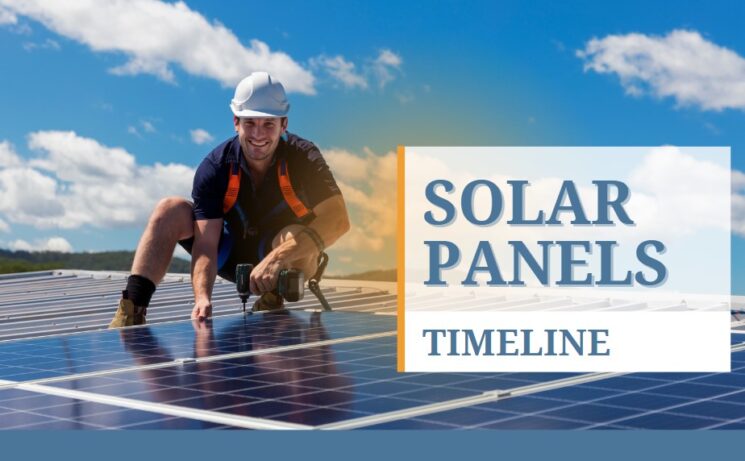 Have you ever wondered who invented the technology behind solar energy? Ever since the dawn of electricity, humans have been searching for ways to create energy from natural sources. Solar energy has been a long-standing technology, from its earliest roots in 19th-century Europe to its modern incarnation today. In this blog post, we’ll explore the history of how solar panels were invented and how their development has shaped the world. Let’s dive into the history of solar power!

Solar panels, also known as photovoltaic cells, are an integral part of the transition to green energy. By harvesting the power of the sun and converting it into usable electricity, solar power can help reduce our dependence on fossil fuels and create a more sustainable energy source for homes and businesses.

Nowadays, solar panels are becoming increasingly popular across the world both in residential homes and large commercial projects alike.

However, solar panels actually have quite a long history which dates back to well before their most common modern form was invented in 1954. Throughout this article, we will be exploring some of the key points in their development over time – from Alexandre Edmond Becquerel’s work in 1839 to improvements over the following decades that made them suitable for commercial applications in 1994.

From there we will take a look at the current state of solar panel technology and how they can be used today.

The history of solar panels traces back to the 19th century when French Mathematician, Augustin Mouchot, invented the first functioning model. Mouchot used a large parabolic reflector to create steam by focusing sunlight into a pipe filled with water. This model demonstrated that sunlight could be utilized as a practical energy source, thus paving the way for further experimentation and development.

Even though early engineers attempted to improve upon Mouchot’s initial idea, their efforts were met with limited success due to the lack of suitable materials and technologies. However, in 1954 two Bell Labs scientists developed the first working silicon solar cell which was capable of converting 4% of sunlight into electrical energy – a significant breakthrough compared with previous accomplishments.

This milestone enabled further experiments in photovoltaic technology to make possible what we use today – solar panels that are effective at capturing and converting sunlight into electricity. In 1960 these breakthroughs made it possible for solar panels to power small devices including calculators and watches.

The tremendous progress made over the past few years has allowed solar panel technology to become increasingly cost-effective which has enabled widespread adoption across many applications ranging from residential homes and commercial buildings all the way up to larger scale projects such as utility-scale farms generating hundreds of megawatts of energy each year.

Solar energy technology has a long and fascinating history that began more than two thousand years ago. In the 7th century B.C., the Greek scientist Archimedes is purported to have used a large reflecting mirror to focus the sun’s rays and set ships on fire. In the 1840s, Alexandre Edmond Becquerel discovered the photovoltaic effect, which laid down the foundation for modern solar photovoltaic panels.

Solar cells were developed in 1941 by Russell Ohl at Bell Labs, leading to further advancements in the early 1960s — these solar cells were made from silicon and other earth materials. In 1964, several Bell Labs solar cells provided enough energy to power a satellite orbiting Earth — this milestone ushered in new possibilities for solar energy applications.

By 1974, scientists had developed silicon-based photovoltaics that could convert light into electricity with 18 percent efficiency levels — this was about double what was achievable in previous years. By 2016, photovoltaics showed remarkable improvements in efficiency levels of up to 24 percent for the production of solar technology.

This marked major advancements for industries producing electricity from sunlight. Today’s solar technologies continually improve based on research and development efforts are made each year.

The history of solar panel technology has been marked by various discoveries and technical improvements over time. The first photovoltaic cells, also known as solar cells, were developed by French physicist Edmond Becquerel in the 19th century. These primitive solar panels used silver chloride to produce electrical energy when exposed to sunlight.

In the mid-1950s, photovoltaic cells using silicon were invented, which had the capability of efficiently converting sunlight into electrical energy required for household use. This prompted further development and research into solar power technology in the 1960s, resulting in the advanced solar cell designs and systems we use today.

The efficiency of modern-day solar cells has significantly increased from their precursors. Nowadays, most commercial photovoltaic systems are produced using crystalline silicon PV devices which are designed to be more efficient and durable than previous iterations.

Photovoltaic system modules can usually produce electricity with an efficiency rating of close to 20%, depending on their construction and application environment. This opens up exciting applications such as powering small-medium businesses or even entire households through roof-mounted or ground-mounted systems.

Modern solar panels were first developed in the 1950s when scientists at Bell Laboratories discovered how to use semiconductor materials to convert sunlight into electricity. Following this development, the first commercial photovoltaic (PV) cells were unveiled to the public in 1954.

Since then, advances in technology and reduced costs have made solar power more accessible and attractive for residential and commercial use. Today, photovoltaic (PV) systems are commonplace around the world with panels of varying sizes, shapes and efficiencies available for sale.

The most common type of photovoltaic panel today is known as a crystalline silicon or mono-crystalline system. It consists of one or more cells made from a large slice of silicon crystal covered with metal contact points on one side, which is contained within an outer panel attached to a supporting frame.

The cell converts sunlight falling upon it into electricity through a process called the “photovoltaic effect“. Solar power systems may include one or multiple panels wired together to create an array that can provide enough electricity for homes and businesses of all sizes.

In recent years, new technologies such as thin-film solar cells have been developed to make PV products lighter and easier to install on roofs or other surfaces around homes or businesses. Compared with older crystalline systems, these new systems offer significant advantages in terms of cost efficiency, size and weight savings – all factors that contribute towards making them more attractive for wider adoption globally over time.

Solar panels offer a number of advantages to homeowners and businesses that want to generate their own electricity. Solar energy is clean, renewable, and abundant. By using solar panels, you can reduce your environmental impact while saving money by significantly reducing or eliminating your electricity bills.

There are several benefits to installing solar energy on your property:

Rooftop solar can provide significant cost savings over time by reducing or eliminating a portion or all of your electricity bill for years to come.

Solar panels work by providing clean and renewable energy with no emissions that would harm the environment or contribute to global warming.

Solar energy will produce the same amount of power each year, regardless of the weather or season, meaning it can be relied upon as a reliable source of power in areas without reliable wind patterns or consistent access to fuel sources such as natural gas.

Additionally, most manufacturers provide warranties on their products meaning that if any part is damaged within an allotted timeframe, it will be replaced at no cost.

Solar panel installations are becoming more popular due to their ability to help increase the market value and appeal of properties they’re installed on—potentially leading to increased housing prices overall in many markets. 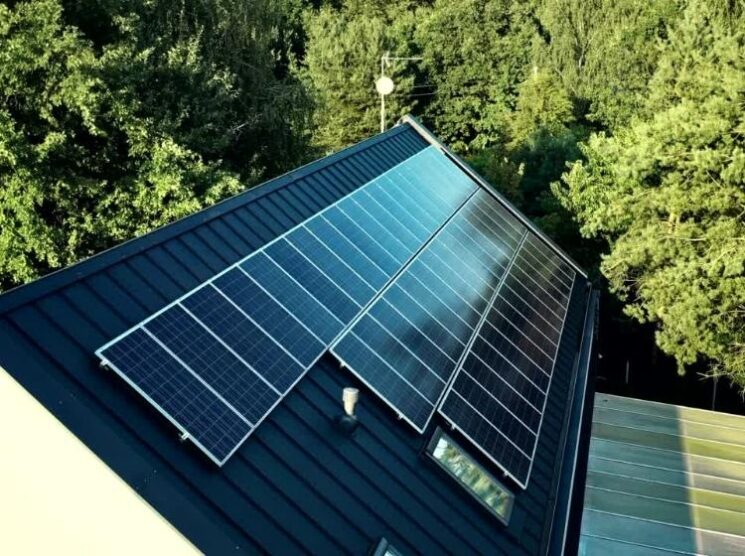 The use of solar power technology is receiving more attention and interest from individuals, organizations, and governments. However, there are major challenges that stand in the way of more widespread adoption.

The cost has been a major factor in restricting the growth of solar solutions. Solar technology has had significant development to bring costs down, but a great deal more investment is needed to make it cost-effective against other energy sources such as fossil fuels. Government incentives can play an important role in reducing the up-front cost for solar solutions for individuals and businesses by providing tax credits and other financial support measures.

In addition to cost concerns, another challenge concerns the availability and access to high-quality equipment. Although there are many different companies offering solar panels, some poorly produced units have been installed that fail to provide satisfactory performance. As such, it’s important to ensure that any potential purchaser checks out all the available options before purchasing in order to guarantee quality products with reliable warranties.

Finally, another major challenge is public education regarding solar power systems— people need to understand how this technology works as well as any associated benefits before they will decide if it’s right for them or not. Companies need to ensure that users understand how their product works and what they should do when they encounter unexpected circumstances (e.g., exposure to extreme snow or heat).

In conclusion, the invention of solar panels brought a huge impact on the world. It provided an affordable, clean and renewable source of energy that has helped shape the way that many people think about energy use today. Although there were some initial slowdowns in development due to cost and efficiency issues, new technologies and innovations have quickly allowed for vast improvements.

Solar cells are now among the most efficient means of generating power on the planet, and their ability to store energy makes them even more valuable as a source of renewable energy, allowing us to become more independent from traditional sources while protecting our environment. With research continuing into improvements in solar panel technology and efficiency along with advancements in the materials used to create these cells, it is likely that further developments will be made in this field over time.